How to build a team – According to Bruce W. Tuckman 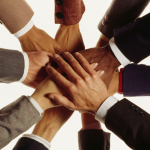 Building a team is not an easy task. This is because there so many different stakeholders in today’s team structures. There will be a manager who might not be that proficient in technology matters, a technician who is not interested in management topics, an account manager who is only interested in sales figures. But somehow all these people have to work together.

Bruce W. Tuckman has described team building in an interesting way. In this blog post I want to give an overview of his methodology.

Tuckman describes team building in 4 phases. It begins with „forming‚ goes on to „storming„, then to „norming“ and in the end „performing„. Each phase is characterized in having certain behaviors and actions by the team members.

In the forming phase the team gets assembled together. It is a phase of high uncertainty. Usually people tend to want a high level of certainty. Each member will look for a position and a role in the team. They get to know each other and try to find out which kind of behavior is accepted by the group. The members will also show a high level of kindness towards each other.

It this phase the manager of the team has to help the team members to adjust to each other. The manager has to clearly articulate the goals, direction, structure  and the benefits of a collaboration between the team members.

Storming is a phase of conflict. Problems will begin to surface. These problems will apply to the rules of engagement as well as how the task should be approached. The team members will also struggle for the informal leading position within the team. Each member will present him or herself in the best possible way and there will be smaller and larger conflicts. A fight over power will arise. Each person acts in an ego manic fashion („me“-approach).  The discussions will seem to go nowhere.

The regulating phase, also called norming, is dominated by a „we“-approach. The individuals have formed into a group and have learnt ways to deal with each other. The communication between the team members works well in this phase. All members of the team accept the rules of engagement or the rules of the game so to say. The team will try the best to keep the group together and to involve all team members.

Now the manager can distribute the tasks to the different team members. He has to ensure that the tasks and roles are in line with the interests, needs and strengths of each team member. The manager should also have a focus in keeping everyone adhering to the rules of engagement they have agreed on. The manager can more and more go into the role of a moderator and can bring the team members steadily into the decision making process.

In this phase it’s all about orientation towards the actual work and flexibility in doing these. The team will act target oriented and also in an open fashion towards each other. The team members are able to work together and to accomplish their given tasks.

The manager has not much to do in this phase regarding team management. As a moderator he trusts his team and holds regular meetings. In this phase the manager will mostly concentrate on the goals of the project. He can help to improve the skills of individuals in the team. He will present the team towards external stakeholders. In more mature teams the leading role can also rotate between the team members.

According to Tuckman the Team building phases can be gone through consciously or unconsciously. This approach can help to ascertain where the team is in the team building process at a given point in time. The manager can therefore help his team to find ways to get into the next phase.

The goal of all phases is to reach the performing phase. If a new team member enters the team, the phase in which the team is will be changing. The phase also changes if a new or additional task is given to the team.

I personally want to repeat the importance of the “storming” phase. This phase has to be accepted as something which will happen in each team building phase. It has to be proactively dealt with. Otherwise the team will always move back and forth from storming to norming, till the team breaks up in the process of this.

What’s your input about team building?

The author is the CEO of YUHIRO, a German-Indian company which provides software developers to small and medium sized companies. You can reach him via sascha.thattil@yuhiro.de