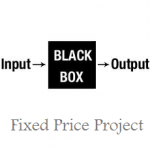 As someone who is offering offshore outsourcing services the question of “whether the dedicated developer or the fixed project model is better” is something which I am thinking about a lot these days.

So what is better?

In a fixed priced project a client would not know how much of development effort was actually taken to develop the software concerned. He will be relying on the estimate made by the software outsourcing company. It will be incredibly difficult to know how much development effort went into the project. This might be ok if a client has deep pockets but for companies who look at offshoring to reduce costs it might be interesting to exactly know what they are paying for.

In a fixed price project model the customer would be sending a project into a black box (in this case the near- or offshore outsourcing company) and would wait for a positive outcome. The client would not have any influence during the project, although he could ask for updates on the project progression.

Close colaboration on quality of output

The dedicated developer would be getting to know the quality standards of the onshore team as he will be closly working together with them for the whole day (at least for the 3 or 4 hours in which there is daytime in each country concerned).

Personal relations are always important. It does not matter in which kind of business relationship. But having a personal contact with the dedicated developer will help the client to understand the needs of the developer better. In turn the developer will be really getting to know the products, culture and people of the clients company he is working with.

As you can see from the above points it could be argued that the dedicated developer model is the one to go with.

What is your opinion on this?

YUHIRO is a German-Indian software company which provides dedicated software developers to companies in Europe. It also has project teams which work on fixed priced projects. If you want to know more on the different options for software development please feel free to contact us at info@yuhiro.de or call us through our service number.